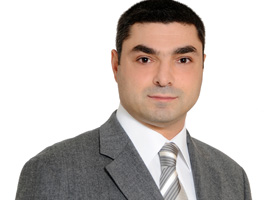 Dr Mavrikakis was born in Athens. He graduated from Charles University, 3rd Faculty of Medicine, Prague, Czech Republic in July 1997. He received his general ophthalmic training in the United Kingdom at Eastbourne Hospital, Sussex Eye Hospital (part of Brighton and Sussex University Hospitals), and Royal Berkshire Hospital. He has completed 2 oculoplastic fellowships in the United Kingdom, one at Sussex Eye Hospital, and one at Queen Victoria Hospital, under the supervision of Mr Brittain and Mr Malhotra respectively. In addition, he has completed an orbital fellowship at the University of British Columbia, Vancouver, Canada, under the supervision of Professor Jack Rootman, who is known worldwide for his expertise in orbital disease and his significant contribution in the evolution of orbital surgery.

After 13 years of training in Czech Republic, United Kingdom, and Canada, Dr Mavrikakis returned to Greece in August 2006. Since, Dr Mavrikakis is practicing as an oculoplastic, lacrimal and orbital surgeon in Athens.

He was awarded his PhD from the University of Athens, Medical School, in May 2005.

He was an associate at Attikon University Hospital in Athens, from September 2006 to September 2009, training residents on his subspeciality.

He has translated in Greek the book 'A Manual of Systematic Eyelid Surgery', third edition, by J.R.O. Collin, the first greek oculoplastic manual published in November 2012.

He is a reviewer in 9 major scientific journals including 'Ophthalmology', 'Ophthalmic Plastic and Reconstructive Surgery', and 'Eye'.

He has over 50 publications in peer-reviewed scientific journals and has contributed a book chapter in the 'Encyclopedia of the Eye' by Elsevier, published in May 2010. He has presented scientific papers, given lectures and run courses in many countries including the United States, Canada, United Kingdom, Greece, France, Germany, Spain, Portugal, Austria, Belgium, Switzerland, Slovenia, Turkey, and Singapore.

He is the head of the Orbit department at the Athens Eye Hospital.