The lens of the eye is found behind the iris suspended from ciliary body with an array of fibers, which together form the zinneio belt (named after the German anatomist Johann Gottfried Zinn).

If for some reason any of these fibers break, the lens, which is naturally concentric with the iris, will show instability and may move from its position. 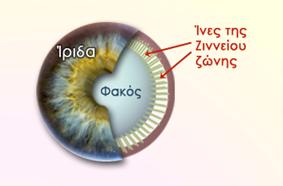 Parents may notice a flickering of the iris as it is no longer supported by the lens – a phenomenon called iridodonisis.

Causes include hereditary diseases such as Marfan syndrome(characterized by long and thin upper and lower limbs, superelasticity of the joints and skin and cardiac problems) and homocystinuria (a metabolic disease with clinical profile similar to Marfan syndrome), while older children rupture zinneiou area can come from injuries.

A small displacement of the lens can lead to myopia or astigmatism, if the optical axis no longer passes through the central lens. Such mild cases can be dealt with appropriate glasses. However, if the displacement is large and the optical system of the eye is irreparably disrupted, then it can only be treated with surgical removal of the displaced lens.