When the conjunctiva is irritated from some cause, the vessels dilate and the blood flow is increased giving the eye that red color.

Tearing and mucous secretions
The irritation of the conjunctiva leads to increased production of tears and thus tearing is a common symptom of conjunctivitis. In fact, this increasing of tears is something that we want, since it helps in cleaning the eye from a potential irritant.

The irritation also stimulates the production of mucus. If the cause of the conjunctivitis is bacterial, the precipitations become mucopurulent and contain pus, which are dead leucocytes and residues of microbes. These are the result of the battle of the organism against infection.

Conjunctivitis and the common cold
Due to the communication between the eyes and the nose (the drainage of tears normally empties them to the nasopharynx), it is possible that with an ascending path, viruses and germs can reach the eye from the nasal cavity and cause conjunctivitis.

The immune system declining caused by the initial infection also contributes to this. So the common cold may sometimes be accompanied by conjunctivitis, but not always.
Tearing can occur during the course of a cold, but it does not necessarily mean inflammation of the conjunctiva. A cold leads to swelling of the nasopharynx and outlet obstruction of the lacrimal tract leading to overflow of tears that are not evacuated, without though the presence of conjunctivitis.

Identifying the cause Possible causes of conjunctivitis are irritation, trauma, infection and allergy.

Irritation: A mild conjunctivitis is usually the result of a mild irritation. Smoke or dust in the air, the chlorine in a pool and even the sea salt can cause irritation of the conjunctiva. The main defense mechanism of the organism in these cases is blinking which humidifies and washes the outer surface of the eye. Though, children often "forget" to blink, resulting in the irritant agent staying in the eye.

Addressing such mild irritant conjunctivitis is mainly based on the administration of abundant artificial tear drops and the removal of the agent that caused the irritation.

Wound or foreign body: If it is suspected that a foreign body entered the eye or that there is a wound in the child’s eye, the parents should address an ophthalmologist as soon as possible. The symptoms make a sudden invasion and include increased tearing and sensitivity to light. Pain and photosensitivity may mean a corneal involvement.
The ophthalmologist will examine the child in a special microscope called a slit lamp, and use papers with a special dye, called flouoroseini to "paint" for 1-2 minutes the eye’s cornea.

This pigment concentrates in the deficit areas of the cornea and glows when a special blue light illuminates the area, highlighting abrasions, injuries etc.

If we find a foreign matter, it must be removed and the subsequent treatment comprises an antibiotic collyrium and artificial tear drops. Sometimes the doctor may recommend closing the eye with a special pad. There are even cases (such as injuries from a plant, where fungi may be involved) wherein covering the eye is not recommended.

The cornea shows great healing ability and even in major deficits, if they are superficial, they can heal within 1-2 days.

Viral conjunctivitis: Usually the adenoviruses are responsible, which can also simultaneously cause an upper respiratory infection. The epidemic form (in which the  adenoviruses 3, 8 and 19 are responsible) the transmission is made very easily, both from one eye to the other and from the patient to his relatives.

Due to the high transmissivity of the disease, there is a need of special attention in the house when using cushions, towels etc., which are in contact with the infected eye or its secretions. Frequent hand washing or the use of a antiseptic are imposed.

Although the symptoms are severe enough and the disease course long (one month or more), the epidemic viral conjunctivitis almost never causes permanent damage, or threatens vision.

Herpetic conjunctivitis is caused by the herpes simplex virus (mainly the type 1 and the type 2) and can occur even immediately after birth. The initial herpes infection is usually innocent and the cornea is not involved. But repeated relapses, even after years, eventually affects the cornea and causes a dendritic ulcer (a wound resembling to tree branches) and permanent damage. 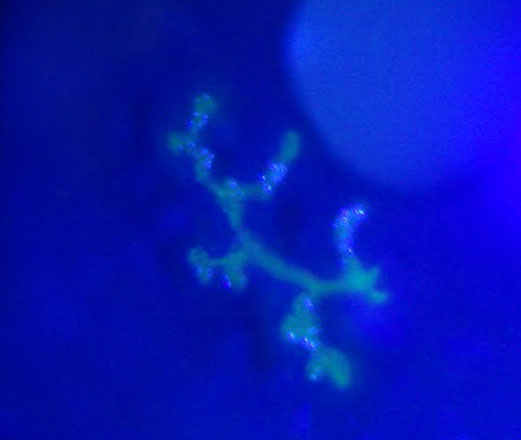 Treatment mainly includes topic application of virostatic facts such as acyclovir (Zovirax). The use of corticosteroids is not recommended when there is an active herpetic ulcer.

Bacterial conjunctivitis:
The bacterial conjunctivitis is more common in children than in adults, mainly due to their weaker defense system. Staphylococcus aureus, one of the most common microbial causes, induces inflammation to the roots of the eyelashes (blepharitis), while sometimes affects the periphery of the cornea. The  Staphylococcus epidermidis shows similar clinical picture but the inflammation is generally milder. The treatment includes cleaning the eyelashes with specific tissues, the use of antibiotic eye drops, and in some serious cases, topical steroids.

The Haemophilus influenzae was once a common cause of conjunctivitis primarily in children under 5 years old, but its impact has been limited due to vaccination programs. Such conjunctivitis are effectively treated with chloramphenicol eyedrops, but there is always the risk of serious blood dyscrasias, even after simple local application.

Other possible causes are microbial streptococci, the moraxela the gonococcus and the pseudomonas. Generally, microbial conjunctivitis is self limiting, even if left untreated, provided, however that the cornea has not been infected. Culturing is rarely required. Treatment includes antibiotic eyedrops and artificial tears while cold compresses may help to comfort the symptoms, if blepharitis coexists.

The main antibiotics used are tobramycin, chloramphenicol, gentamycin and sulfacetamide, and the newer quinolones. Microbial conjunctivitis may be as  infective as the infectious viral. Frequent hand washing, avoiding common face towels, pillows, sheets and compliance with minimum standards of hygiene can prevent the spread of infection from the child to his family members.

Neonatal conjunctivitis
Until the late 19th century gonorrheal conjunctivitis was the most common cause of blindness in infancy. The infection typically appeared during the first days after birth with severe swelling of the eyelids and copious purulent secretions. 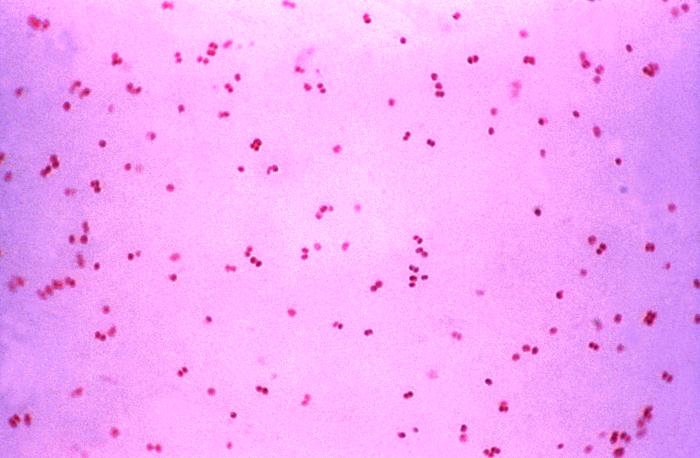 Confirmation of the diagnosis is done by identifying the gonococcus in smears (gram negative diplococcus).

What makes gonorrheal infection so dangerous is the ability of the gonococcus to penetrate the intact cornea causing ulcers and if the infection progresses, even perforation of the eyeball. Confirmation of the diagnosis is done by identifying the gonococcus in smears (gram negative diplococcus).

The instillation of silver nitrate drops in the eyes of all newborns annihilated the disease in countries it had developed and contributed in preventing its serious complications. But there are two drawbacks:

Firstly, the topical application of silver nitrate caused irritation and "chemical conjunctivitis' and secondly it was not effective against another important cause of neonatal conjunctivitis, which is the chlamydia trachomatis.

Like gonorrhea, the chlamydia are firstly transmitted sexually and then from the mother’s vigina to the eyes of the newborn during birth. The chlamydial conjunctivitis usually begins one week after birth with eyelid swelling, redness and purulent secretions, but to a much lesser extent than gonorrheal. Also, it does not penetrate the eye and does not affect vision. However, it can affect the lungs of the newborn after several weeks.

The diagnosis of the chlamydial conjunctivitis is done by culturing or by immunological methods. Treatment consists the regular administration of erythromycin. The also effective tetracycline should not be used in children because of its deposition on teeth.

Children may experience different forms of allergic conjunctivitis, but a constant feature of all is itchiness. Pollen, cosmetics, household detergents, various clothes’ material and pets are just a few of the huge list of potential allergens.

Conjunctivitis with giant teats is another form of conjunctivitis, which occurs when someone is wearing contact lenses and is resolved with the discontinuation of their use.

The erythema multiforme or the Stevens-Johnson syndrome is a rare but very serious form of allergic conjunctivitis which is caused by the overreaction of the body to viruses, bacteria or drugs.

The keystone to the treatment of any kind of allergic conjunctivitis is removing the allergen factor. Beyond that, there are several drugs that can reduce allergic attacks and mitigate allergy symptoms.

Mast cell stabilizers such as sodium cromoglycate, are used for the prevention of allergies and are generally nontoxic.

Conventional antihistamines not only don’t relieve symptoms, but instead they are the ones causing allergic reactions to the eyelids and the conjunctiva. Newer antihistamines, such as levocabastine and olopatadine, have prolonged antihistaminic action and are administered to allergic conjunctivitis for any case.

The use of topical steroids to suppress inflammation should be avoided if possible and eyedrops containing NSAIDs should be preferred.

When is conjunctivitis dangerous
Most conjunctivitis are not considered dangerous and cause no permanent decrease in vision. Problems though can arise from flippant treatment and especially from excessive use of topical steroids.

Steroids (often combined with antibiotics) may promote the occurrence of cataract and the development of glaucoma. Moreover, their use can allow the application of some rather mild infections such as herpetic keratoconjunctivitis. So these drops and ointments should always be prescribed by an ophthalmologist, not empirically by non-specialists who administer them as a general treatment for a red eye.

The use of contact lenses can also convert an innocent conjunctivitis to a severe one. Contact lenses, particularly the ones worn a lot, affect the integrity of the cornea and can induce apoptosis or abrasions of the epithelium, increasing the possibility of corneal ulcer. Anyone wearing contact lenses and feeling discomfort, or if the eye blushes, should remove them immediately and seek help from an ophthalmologist as soon as possible.