Other causes of the "red eye"

There are not only different conjunctivitis causing inflammation of the external eye and a "red" appearance.

There are not only different conjunctivitis causing inflammation of the external eye and a "red" appearance.

An internal inflammation of the eye known as iridocyclitis appears with redness, blurred vision, pain that worsens with reading and photophobia. It is usually idiopathic, but it may accompany a systemic disease such as juvenile rheumatoid arthritis.

A laboratory test that looks for the leukocyte antigen B27 (HLA-B27) in the blood is usually positive. During the eye examination, the ophthalmologist can see inflammatory cells and proteins in the anterior chamber (the space between the cornea and the iris, containing the aqueous humor).

An infection or an injury of the cornea can also cause redness in the child’s eyes.

If the closure of the eyelids is not good, the exposed cornea dries, resulting in irritation, while a condition known as trichiasis, where the eyelashes are directed inward, causes scratches on the cornea and inflammation.

Various infectious factors, including bacteria, viruses and fungi can cause a white wound on the surface of the cornea (corneal ulcer). Strong antimicrobial treatment usually stops the development of an ulcer, but the wounds lead to opacities which may interfere with vision.

Blepharitis (inflammation of the eyelids) is often the cause of very troublesome irritation symptoms, tearing and redness. This is due to staphylococcus infection or from overproduction of sebum by the glands of the palpebral rim. The palpebral rim gets inflamed and often lashes stick together with crust. The blepharitis can cause secondary conjunctivitis, a dry eye, punctate apoptosis of the corneal epithelium, ulceration or corneal scarring (especially lower), barley, chalazion etc.

The hordeolum sty is an acute bacterial infection of the ciliary lip glands, which takes the form of a painful rubella swelling of the eyelid. It is originally hard and pervasive, then pus appears and forms a yellow top, which is often self-limiting and emptied automatically. 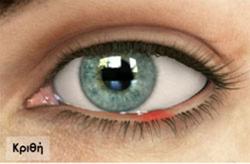 The chalazion may involve the upper or lower eyelid caused by obstruction of the glands resources of the ciliary edge. 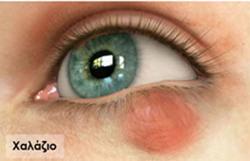 Thus the generated material is not drained, resulting in its accumulation and nodule formation. If the conservative treatment does not yield, the chalazion may need surgical intervention which is performed under a local anesthesia by an ophthalmologist.