Refraction is the direction change of the propagation of light when it passes through a transparent medium.

The human eye has a series of refractive mediums whose function is to focus the image of the objects in front of us on the retina. 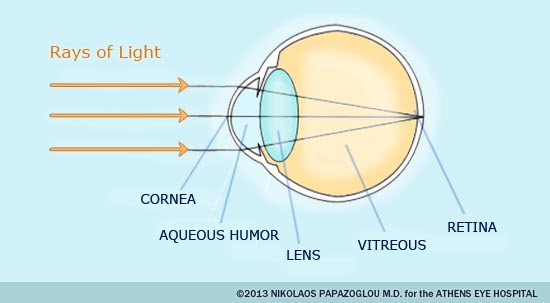 The first refractive medium the light comes across is the lacrimal layer. Although it has a small refractive power, it is of big importance, as shown by the "improvement” in our visual acuity after blinking (opening and closing of the eyelids).
The strongest refractive medium in the eye is the cornea. Its big refractive power derives from the difference in the refractive index compared to the air, as well as the big curvature of the central area.

The crystalline lens has a smaller refractive power but has the additional characteristic of dynamic change that allows us to focus on various distances.
Clear vision is not always feasible, although the eye can be otherwise "healthy”. Construction reasons, such as bigger or smaller curvature of the cornea, variety in the eye’s size etc. make the focusing of the light on the retina impossible without some kind of correction. Such disorders are called refractive errors and are the most usual cause of blurry vision.

Myopia occurs either because the anterior surface of the eye (the cornea) has too much curvature, or because the eye is large in size, or both. The image

In the case of astigmatism, the curvature of the cornea is irregular resulting in distorted image to be formed in front or behind the retina depending

In hyperopia, the eye is usually smaller. The image is formed behind the retina (fundus) of the eye. Long and short-distance vision is blurred.     //

Presbyopia is the condition, in which the eye loses its ability to focus on near objects due to aging. It’s a normal aging process and it starts around...