From light to consciousness

The study of the perception of images began as a philosophical problem but then was soon focused in research of the structure and the function of the eye and the nervous system.

The study of the perception of images began as a philosophical problem but then was soon focused in research of the structure and the function of the eye and the nervous system.
One of the most exciting topics in medicine and science in general, is how images from our environment are light, that is reflected upon various objects and the images manage to reach our brain, get evaluated, and stored.

The window to the soul

«The eyes are the window to the soul», say the romantics and artists, and when we say that someone has "beautiful eyes", we are usually referring to the color of their iris. The color of the iris in humans depends on the amount of melanin pigment they contain. Eyes with high melanin concentration appear to be dark brown or black.

Infants from Asia or Africa are born with brown or black eyes and usually remain so when they grow up. In the Caucasian population babies are usually born with light gray or blue eyes, which during their first year of life get darker and convert to green or brown. The final color of the eyes depends on the rate of production of melanin, which is controlled by heredity. Usually in 6-12 months the color of the eye is stabilized, although small changes may occur later.

It is very rare for man to be born with two different colored eyes. Color changes during life in only one iris, may be associated with pathological conditions and require further investigation.

The iris in heterochromia is rare in human species.

The width of the pupil is not stable and is continuously regulated by various stimuli.

In low light, the pupil grows (a phenomenon called mydriasis) to let as much light as possible into the eye. The pupil also expands when we face a person or object of your choice, or feel pain or danger (psychoasthetic reflex).

On the other hand the pupil shrinks, to restrict incoming light in bright conditions and also to focus on nearby objects (reflex adaptation), or when foreign matter touches the cornea (trigeminal nerve reflex), and also when we close the eyelids (sphincter reflex of the eyelids).

The pupils constrict and dilate simultaneously and to the same extent (synergistic reflex). So if we lighten with a small lens one eye, we will have simultaneous contraction (miosis) in both pupils. Loss of reflex accomplices may indicate brain damage.

Despite its central and prominent position, the iris is not the outer part of the eye. In front of it, there is a transparent layer, called the cornea, and between them there is a space, the anterior chamber, which contains a transparent liquid, the aqueous humor.

The cornea is the entry point of light into the eye and a powerful lens. Although it seems very simple, like a "glass" or a "contact lens", however, is a complex structure consisting of five layers (epithelium, Bowman membrane, stroma, Descemens membrane, endothelium). The maintenance of corneal transparency is crucial for vision and depends on complex biochemical mechanisms. 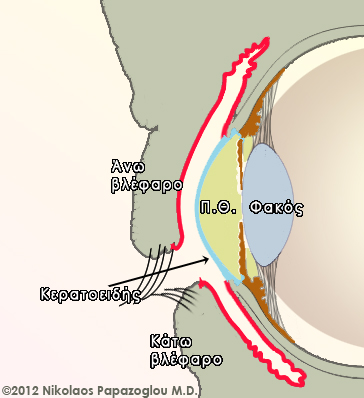 The eye we cannot see

There is much more to an eye of what we see just by looking at it.

Through the sclera is the choroid, which carries blood vessels for the blood flow to other parts of the eye. The iris and the ciliary body (a structure comprising the muscles that control the range of the pupil and the generation mechanism of the aqueous humor) form the middle coat of the eye called the uvea. Uveitis is a large class of inflammation, which may affect the eye, and are found alone or in association with other diseases.

The retina is the inner part of the eye. Although its thickness is only ¼ of a millimeter, it is an extremely complex tissue, which contains  photoreceptors (cones and rods), which are responsible for the uptake of light energy and convert it into nerve impulses.

The central region of the retina between two large vascular branches is called the macula and is in the middle of the fovea, which exhibits a density greater than any other photoreceptor retinal region, and forms the "center" of vision.

The nerve impulses generated in the retina, are carried to the brain by the optic nerve, whose end appears as a pale roundel optic disc. Some of the fibers of the optic nerve of both eyes (intersect) and continue with the rest of the optical pathway on their way to the occipital lobe of the brain at the back of the head.

The vitreous gives the eye its basic volume and is a viscous transparent liquid that comes into direct contact with the retina. The vitreous is loosely attached to the retina, but under certain conditions can be detached (vitreous detachment). The detachment of the vitreous is usually harmless but if not treated promptly, it may sometimes tear the retina and then lead to its detachment with devastating consequences for vision. 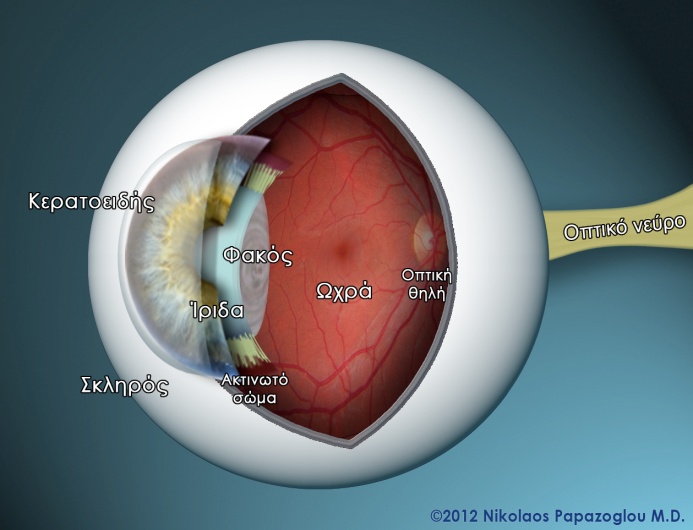 Frequently, with advancing age, the vitreous loses in some places its transparency, resulting in the typical floaters, the visual impression that dark spots float in front of us. Generally speaking the floaters are innocent and over time we stop noticing them.
Although sudden appearance of many spots or dark areas like a curtain or flashes may be associated with more serious conditions such as retinal detachment, and requires an ophthalmologist as soon as possible.

The eye as a camera

The eye is often compared to a camera and indeed there are a lot of similarities. As the optical system of a camera focuses the light on the film, that is how the eye focuses the light on the retina.
The iris is the colored part of the eye that plays the role of the diaphragm and regulates the amount of light that enters the eye, depending on the  brightness of the room in which we find ourselves.
The pupil, which is the dark opening in the center of the iris, grows in an environment with low lighting and shrinks in bright conditions.