Hemangeomas are benign tumours caused by condensed enlarged blood vessels. They can appear anywhere in the body but their presence is especially felt when located on the skin. 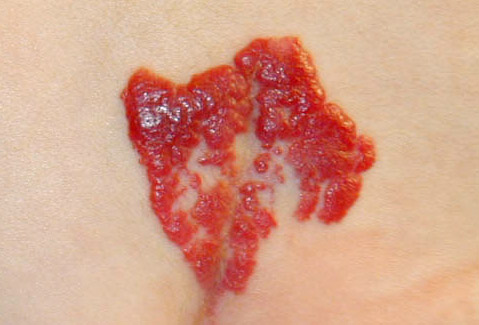 On the skin they appear as bright red or purple palpable lesions that look like strawberries or red sauce and they can form several weeks after birth. The size can vary from a few centimeters to large enough to cover half the head. Their size can increase very quickly in the first few months, after which their growth stabilizes for a few years and finally they start reducing so that by puberty most lesions will have almost disappeared.

If the hemangioma appears on the child’s eye-lid and is quite large, it can have repercussions similar to those of severe droopy eye, in other words, hinder sight which, if not dealt with, can lead to amvlyopeia.

Sometimes steroid therapy may halt or even reverse the rapid growth of hemangiomas but their side effects restrict its use to very severe cases, where the child's vision is threatened. Newer methods of treatment for epipetha mainly hemangiomas include the use of special pulsed dye Laser which is absorbed by the hemoglobin inside the vessel causing thrombosis without affecting the surrounding tissues.