Genetics is the branch of biology that deals with the study of heredity, ie the transfer of specific characteristics from generation to generation.

Ocular genetics specifically deals with genetic basis of certain eye diseases, such as myopia, keratoconus, some retinal diseases and glaucoma. The aim is to predict both the incidence and severity of these diseases, and their responsiveness to various therapeutic options, with the ultimate aim of optimal and individualized treatment.

Every cell of our body contains the entire genetic code that is responsible for our characteristics. Chromosomes are essentially the "books" in which this code is written, and the human species has 46. Each section of these books (which encodes a specific protein in our body) is called a gene.

A gene may determine a certain characteristic, but often more genes may be co-responsible for some of our features, such as height. 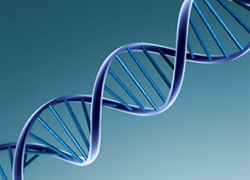 The language for writing the genetic code is apparent from the 4 combinations of chemicals bonds (bases), joined with other building blocks, to form a macromolecule called DNA.

The mapping the complete human genome (Human Genome Project), which appears to contain about 30,000 genes, was recently completed. Thanks to these efforts, the foundations were set to match specific diseases to specific genes, to predict their incidence and deliver genetic therapies intervening directly on chromosomes.

It is obviously that when we talk about heredity, ocular genetics do not only deal with the patient and his family. The truth is that this is a complex issue with economic, social and even moral implications.

Genetic testing begins by taking genetic material for specific laboratory tests and continues to create the patient's family tree. This is a very important stage of genetic testing, as it helps to identify other family members suffering from the same disease (possibly without knowing it), and the chances of the disease being passed down to offspring that have not yet been born, are also considered.

The primary role is proper and essential information given to patients and their relatives, which should always be done on an individual basis and in absolute confidence.

The ultimate goal of genetic testing is the careful design of the patient's personalized monitoring program and the treatment of the disease.

The different variations of a gene are called gene mutations. Some of these (often in combination with environmental factors) appear to increase the risk of disease, while others are reduce it.

For example, CFH and LOC mutations appears to significantly increase the likelihood of age-related macular degeneration, while C2 and BF seems to have a protective role.

The CYP1B1, MYOC, OPTN, and WDR36 genes seems to be responsible - solely or in combination - for glaucoma onset, whereas mutations of the LOXL1 gene are directly linked to pseudoexfoliative glaucoma, where pathological material obstructs the drainage angle of the eye, resulting in increased pressure.

Hereditary eye disease may appear alone or be part of syndromes with findings from other systems, such as cardiovascular, urinary and central nervous systems.

Mutations in a gene can lead to protein coding being inadequate, defective or even detrimental to the health of the cell.

The aim of gene therapy is the replacement of the defective gene with a healthy one in the cells of the affected tissue. The technique that is applied makes use of genetically modified non-pathogenic viruses, that contain the normal gene and carry it to the DNA of infected cells.

Although this seems feasible in theory, it is actually quite difficult in practice. A successful application of this approach was performed recently during which the vision of young patients suffering from Leber's congenital amaurosis, a disease that causes progressive vision loss in the first years of life, was restored to a large extent.

With the continuous increase in the number of eye diseases that appear to have genetic backgrounds and the increasingly encouraging gene therapy results, it is certain that in the near future ocular genetics will become one of the most important diagnostic and therapeutic tools of Ophthalmology offering radical treatments even for diseases hitherto thought incurable.