Effects of glaucoma in the eyes and vision of the child

Edema and corneal clouding,
Increase the size of the eye,
Intense symptoms.

As the disease progresses, the aqueous liquid may penetrate layers of the cornea, causing swelling and loss of transparence. The child's vision is greatly reduced as if trying to see through a fogged window. This clouding of the cornea is often visible to the naked eye and can be seen easily from the pediatrician or even the child's parents.

Even if glaucoma is contralateral, the eye with glaucoma may squint and not be aligned with the other one. If glaucoma occurs in both eyes nystagmus may appear in some cases.

Increase the size of the eye 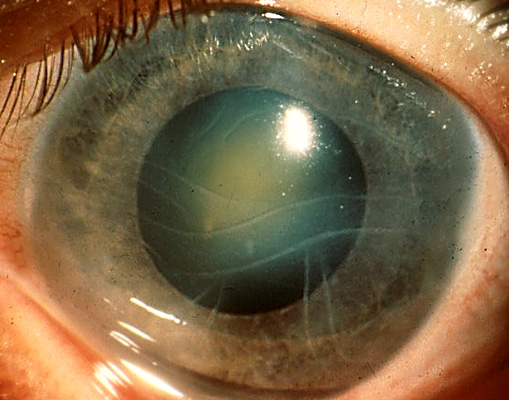 Corneal edema and the characteristics of lacerations of the Deskemeteiou membrane (Haab's striae) in a child with glaucoma.

Unlike adults’ eyes, whose size is stabilized, the eyes of children do not have completed development and still are evendota. This results in increased intraocular pressure also leading to an increase in the size of the eye, just like inflating a balloon, that’s filled with water.

The stretching in the cornea is especially evident, by the typical cracks showing (Haab's striae, from the name of the Swiss ophthalmologist Otto Haab) in  one of the inner layers, the membrane Deskemeteio (named after the French ophthalmologist Jean Descemet). The cornea during birth has a diameter of approximately 10 mm and at the age of 2 minutes it has reached the adult size, which is 11,5 mm. If glaucoma is left untreated, the diameter of the  cornea can exceed even 17 mm giving the eye appearance "eye buff", so such a situation is often referred to as voufthalmos.

Increasing the diameter of the intramedullary eye leads to myopia, since the optical system of the eye is unable to focus the image on the retina, which has receded rearwards. In fact most children with glaucoma already have high levels of myopia. Even if the anteroposterior diameter is increased by one millimeter, the result is an increase of myopia by 3-4 degrees, which is sufficient to blur the vision of a child who has already myopia in the limits of legal blindness.

Unfortunately, the increasing of the eyes’ size is not always obvious and it becomes even more difficult when glaucoma is bilateral. In the latter case, the admiration of the parents' beautiful big eyes' of their child may lead to disappointment.

Certainly glaucoma is an uncommon disease in children and the "big eyes" of infants are rarely with glaucoma.

Due to its increased pressure, the aqueous humor enters the cornea and leads to the formation of fine bubbles on its surface. Because the bubbles are too thin, they break, thus behave like multiple cuts and disturb the child, who has a feeling that a foreign body in the eye.

Photophobia is also particularly strong. Even in regular lighting conditions of a room the child resents and closes his eyes tightly, or tries to cover them with his hands. The exposure to a stronger light, such as the sun’s, causes severe pain and is really unbearable.